The chakras are more dense than the auras, but not as dense as the physical body, but they interact with the physical body through two major vehicles, the endocrine system and the nervous system. 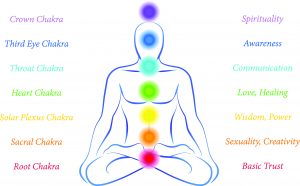 A Quick overview of The Functions of the 7 Major Chakras from Root Chakra to Crown Chakra:

The Root Chakra is associated with the Reproductive Glands. It is the centre of physical energy, grounding and self-preservation. The possible physical issues affected by an out of balance Root Chakra are auto-immune disease, arthritis, cancer, AIDS, CFS, EBV, fatigue, kidney, spinal column. The Root Chakra governs the back, feet, hips, spine and legs.
Endocrine Gland – Adrenals
Areas of Body Governed – Spinal Column and Kidneys

The Heart Chakra is associated with the Circulatory System/Thymus Gland. It is the centre of compassion, love, group consciousness and spirituality. The possible physical issues affected by an out of balance Heart Chakra are heart problems, thymus, blood, circulatory, involuntary muscles. The Heart Chakra governs the heart, lungs, blood and circulation.
Endocrine Gland – Thymus
Areas of Body Governed – Heart, Blood, Vagus Nerve and Circulatory System

The Crown Chakra is associated with the Central Nervous System/ Pineal Gland. It is the centre of enlightenment, dynamic thought, truth and oneness. The possible physical areas affected by an out of balance Crown Chakra are cerebrum, pineal gland, right eye. The Crown Chakra governs the top of spinal cord, brain stem, pain centre, nerves.