Native American sage burning/smudging is the most commonly recognized practice of burning sage. But other cultures have incorporated this practice for many years. Sage energetically purifies and clears a space.

Burning sage or smudging should be done to keep yourself and environment energetically balanced. It promotes maintaining a peaceful state of being, spiritual awareness, intuition, clears negative energy, and is especially helpful when you’ve been around people that are depressed, fearful, ill, emotionally unbalanced, mentally ill, emotionally or physically toxic, or angry. Smudging creates a wonderful “lightness” of the atmosphere. When you smudge on a regular basis, harmony prevails. (remedygrove.com, 2020) 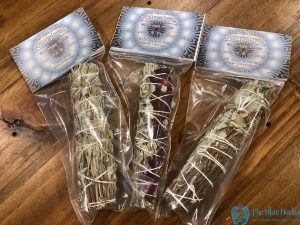 In general, the practice of smudging dates back to prehistoric times, and is still very much in use today. A recent research has shed light on the popularity of this activity, revealing that burning certain plant matter may clear harmful bacteria.

Smudging is one of the ways to energetically cleanse space of old, dense or negative energy. Only recently it has been scientifically validated that smudging may also reduce areal bacteria population.

The scientific paper entitled “Medicinal Smokes” and published in the Journal of Ethnopharmacology focuses a scientific lens on the practice, which is becoming more and more widely practiced.

The research study looked into herbal and non-herbal remedies that were administered by the burning of various matter.

The research included information from 50 countries over 5 continents and found that, predominantly, smoke administered medicinally is mostly used to aid lung, brain and skin function. In addition, it was revealed that passive fumes doubled as a sort of air purifier.

The purpose of the study was to see whether or not these medicinal smoke deliveries could be explored by western medicine, because “The advantages of smoke-based remedies are rapid delivery to the brain, more efficient absorption by the body and lower costs of production.”

A follow up paper published in the same periodical, “Medicinal smoke reduces airborne bacteria,” found that the research concluded that, in addition to health benefits, smudging was a powerful antiseptic.

In short, burning medicinal herbs cleared airborne bacterial populations by 94%, and the space was still found to be disinfected a day later. What’s more, a month after smudging, much of the pathogens originally found were still undetectable.

This has profound implications, as modern air quality in the developed and undeveloped world is atrocious, containing up to 1800 bacterial types, many of them pathogenic. (thespiritscience.net, 2020)